Regulation on US market structure is likely to continue this year as the  Democrats control Congress and Gary Gensler has been reportedly appointed as head of the Securities and Exchange Commission.

Kevin McPartland, head of market structure and technology research at consultancy Greenwich Associates, said in a webinar today that there will be more regulatory action as a Democratic administration takes over next week.

We're getting set up to discuss #marketstructure trends live at 11a ET today. Join us. https://t.co/CBaevw8fJ3

Reuters has reported that Gary Gensler, former head of the Commodity Futures Trading Commission, will be appointed as head of the SEC. McPartland said: “He was a prolific implementor of the Dodd-Frank Act when he was head of the CFTC so regulation will be something to watch.”

Shane Swanson, equities and financial technology expert in the market structure and technology practice at Greenwich Associates, continued on the webinar that the SEC will be implementing Reg NMS 2.0 this year. The regulator also agreed to make changes to market data infrastructure when it removed the monopoly on exchanges as securities information processors (SIPs) last year. Exchanges will be required to provide SIP data to “competing consolidators” and the SIP will also include more depth-of-order book data.

.@LSEGplc confirms that the European Commission has conditionally approved its proposed all-share acquisition of @Refinitivhttps://t.co/0nTNOcBlh9

“There will be other combinations of exchanges and data providers,”Swanson said. “This deal puts pressure on the other exchanges to become more competitive.”

He also noted the rise in off-exchange equity trading in the US which resulted in an exchange, Cboe Global Markets, this month completing an acquisition of BIDS Trading, which operates the largest US block-trading Alternative Trading System.

“There are not many independent ATSs left but they are all potential targets,” Swanson added.

He highlighted that the rise in off-exchange trading could potentially impact price discovery at some point, if it becomes too large a majority of trading.

In addition Swanson noted the growing popularity of other types of trading such as suing artificial intelligence systems and conditional order types.

One topic was the lack of liquidity in thinly-traded stocks. The SEC has suggested the suspension Unlisted Trading Privileges, which allows for stocks listed on one exchange to be traded on all others, which has been supported by Nasdaq while Cboe has filed to launch periodic auctions 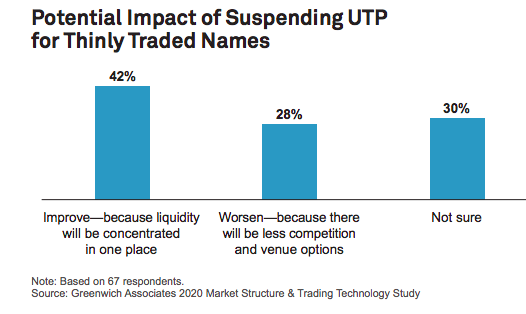 The survey said: “Our respondents were generally in favor (42%), believing such an action would help to consolidate liquidity in these securities. However, just over a quarter (28%) think that suspension of UTP would end up harming markets over time as a result of lack of competition for orders and among venues.”

Greenwich added that suspensions would have to designed carefully so as not to harm the markets they are intending to enhance.

Last month the SEC approved a Market Data Infrastructure rule which Greenwich said will likely meet both implementation and legal challenges  to bring it into effect in this year.

There will be changes to the odd lot regime under Reg NMS as they are a significant and growing part of the trading environment. 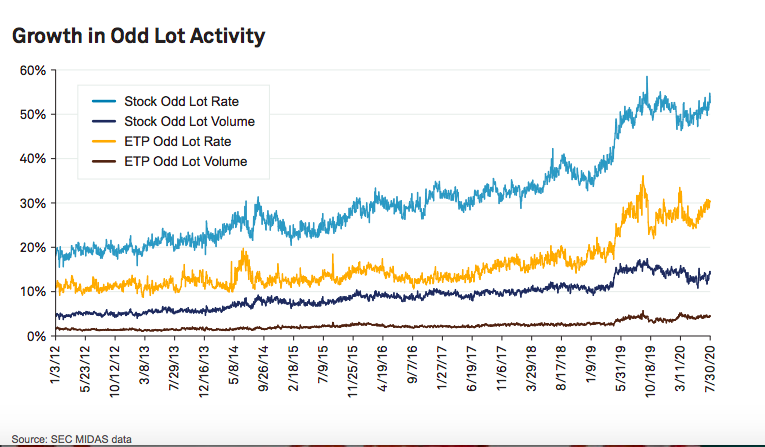 Greenwich said there is a tremendous amount of trading information contained in odd lots. The odd lot rate has been above 50% off all orders place since July 22 last year and on August 28 hit 58.23%, the second highest in the time frame.

The SEC’s MIDAS system displays information on odd lots going back to 2012, covering NMS stocks and exchange-traded products. Odd lot information will now be included as core market data provided by the SIPs.

“Much of the trading in higher priced securities is done in odd lots, both in terms of actual trades as well as in terms of what is actually quoted,” added the report. “When you consider that you have to place an order valued at well over $300,000 in order to get a protected quote in Amazon (AMZN), it certainly seems like it is time to make some  changes to the odd lot regime under Reg NMS.”

In addition, under the new rule the SIPs would be expanded to include five levels of depth of book, certain auction information as well as updated round lot definitions, which met the approval of the majority, 54%. of the survey respondents.

Greenwich said: “The hardest part of the argument is drawing the line between what would be an enhancement to one of the underpinnings of what makes the U.S. market the envy of the world, and what could cause confusion to the ultimate primary user of the SIP, the retail investor. The implementation of the new data into the SIP will be a difficult bridge to build.”