Margin volatility and unpredictability was the biggest challenge from the increased volatility caused by the Covid-19 pandemic according to a survey of derivatives market participants.

More than 75% of respondents to a poll at the virtual IDX conference yesterday cited margin volatility and unpredictability as their biggest concern. 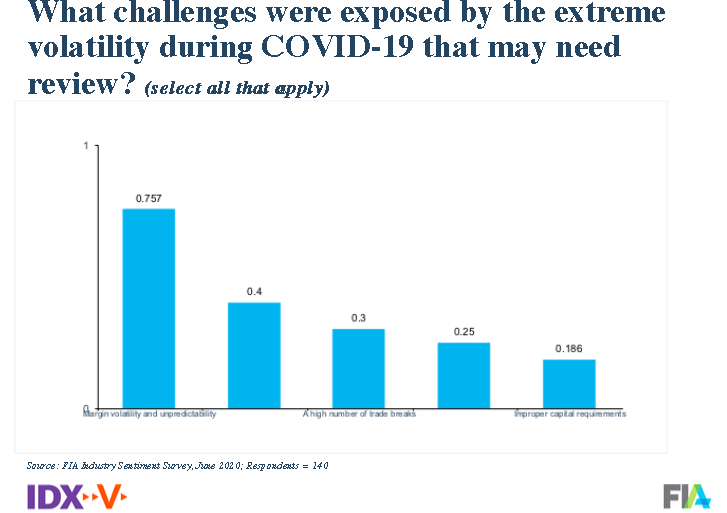 Hester Serafini, president of ICE Clear Europe, said on a panel at the virtual conference yesterday that the majority of the increase was from variation margin as positions were marked to market.

Serafini said: “We are very supportive of having a volatility floor and higher margins in peacetime but that would need to be applied consistently across all regimes to avoid arbitrage.”

She continued that users can run stress tests which will give a good indication of likely margin calls.

“Margins increased in incremental daily steps to between 18% to 19%  but half of that increase was also due to new business,” he said. “Different asset classes also behaved differently so we need more precision in the analysis.”

Maguire said LCH calls margin three times a day, which is different from other CCPs, because it clears asset classes globally in multiple currencies and netting portfolios decreases risk.

“There was no change in our behaviour and it is good not to change during a crisis,” he added. “The aggregate size of the calls was also less than 10% of the initial margin being held.”

Jan Bart de Boer, chief commercial officer at ABN Amro Clearing Bank, said there will be a discussion this year between CCPs and their clearing members on margins when he was interviewed at the Eurex Digital Derivatives Forum this month.

de Boer continued there has been a slow-burning discussion between market participants and CCPs on the distribution of risk and reward which has become more urgent since Covid-19.

“Margins increased over a very short time so maybe they are too low in normal markets ?” he added. “The performance of CCPs has been stellar but clearing members have lost a year of income.”

Recent market turbulence highlighted the importance of margin as a safeguard against counterparty credit risk. Prudent margining is not a trade-off with liquidity risk, and liquidity strategies should account for potential margin calls. https://t.co/aUS76b4qFG #BankOverground pic.twitter.com/Zqn7CNosTK

The UK central bank said margin helped to ensure derivatives markets remained resilient throughout the recent market shock but also resulted in a large movement of liquidity around the financial system.

“This contributed to a ‘dash for cash’ in March 2020, as some market participants appeared to have insufficient buffers of cash-like assets to meet actual or anticipated margin calls,” said the study.

The report said prudent margining is an important part of risk management in the system and is not a trade-off with liquidity risk.

“Participants in derivatives markets should ensure their liquidity management strategies take account of the possibility that margin calls and requirements may rise significantly during periods of market turbulence,” added the Bank of England.