David Schwimmer, chief executive of London Stock Exchange Group, said the company has started exploratory discussions which may result in a sale of MTS, the bond trading platform, or potentially Borsa Italiana.

Schwimmer said on LSEG’s results call this morning that good progress is being made on the proposed acquisition of data provider Refinitiv.

He said: “We are in constructive dialogue with the European Commission during their Phase II review and commenced exploratory discussions which may result in a sale of MTS or potentially Borsa Italiana.”

MTS is an electronic bond trading platform and Refinitiv owns a stake in Tradeweb, which provides electronic markets for fixed income, derivatives and exchange-traded funds.

Kyle Voigt, an analyst at KBW, said in a report last month that the announcement of a Phase II review is not a surprise and neither are the areas of preliminary concern – the combined entity’s concentration in electronic trading of European government bonds (MTS and Tradeweb); the vertical integration of trading and clearing of interest rate derivatives (Tradeweb and LCH), and competitor access to LSE and Refinitiv data.

Voigt had expected that the most likely remedy would be a divestiture of MTS.

“A more negative outcome for LSE would be a forced divestiture of Tradeweb, but Voigt views this as a lower probability but still possible outcome,” added the report. “Voigt views Tradeweb as a key strategic asset, and the crown jewel of this transaction.”

Schwimmer continued that unconditional merger control clearances had been received in a number of other jurisdictions. CFIUS, the US committee which approves foreign investment has not raised objections and the US Department of Justice has closed its antitrust investigation of the transaction without remedies.

“We also continue to make good progress on integration planning to ensure we are ready to deliver the benefits of the transaction to our shareholders, customers and other stakeholders,” he added . “We expect to close the transaction by the end of the year or in early 2021.”

Post-trade revenue rose 9% from the first half of last year to £372m which Schwimmer said was driven by strong growth in LCH, the clearing business. LCH had record activity in credit default swap, foreign exchange and cash equities clearing. 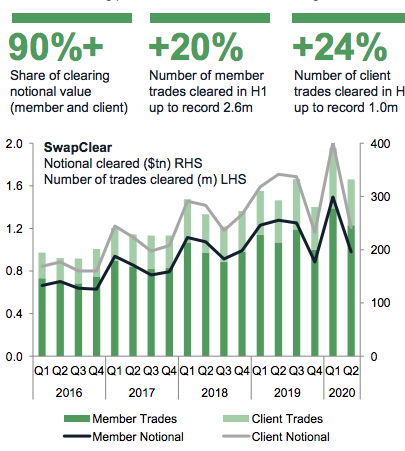 EquityClear went live with a new LSEG Technology post-trade platform in April and cleared one billion trades in the first half for the first time, a 50% increase in volume.

ForexClear is slated to launch non-deliverable options on October 1. The exchange said this will increase coverage of addressable FX products at ForexClear to approximately 18%, with $50bn average daily turnover in traded NDOs. Non-deliverable currencies are those where exchange controls make it difficult for overseas investors to make a physical cash settlement, for example, the Chinese renminbi.

Schwimmer said the group has been preparing for all Brexit scenarios for a number of years.

The UK has left the European Union and the withdrawal agreement provides for a transition period until the end of this year, during which LCH remains an authorised CCP in the EU.

“The European Commission announced the adoption of a time-limited equivalence decision for the UK in this area and adopted EMIR 2.2 Delegated Acts which are now under the scrutiny of the European Parliament and Council,” added Schwimmer. “This forms the base for LCH to engage in the application process under EMIR 2.2 to ensure a smooth transition to being a recognised, non-EU, CCP.”

In addition other subsidiaries, UnaVista, TRADEcho and Turquoise, have already received regulatory authorisation in The Netherlands.

FTSE Russell maintained a steady market share of approximately 20% in passive assets under management benchmarked to its indices.

There is also more than $100bn passive AUM benchmarked to FTSE Russell environment, social and governance indices, which are experiencing double-digit year-on-year growth. 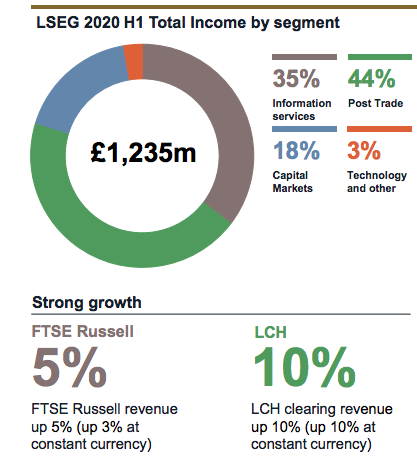 The exchange highlighted the launch of a series of four ESG exchange-traded funds with HSBC;  the development of the FTSE TPI Climate Transition Index Series alongside The Church of England Pensions Board and the Transition Pathway Initiative.

Schwimmer said: “We have a strong ESG pipeline going into the second half, for example,  newly developed products linked to Beyond Ratings data.” 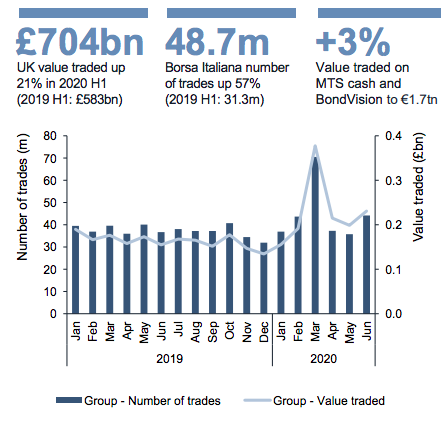