The UK Financial Conduct Authority included the transition from Libor as one of its four priorities this year in its supervision of wholesale financial markets.

The regulator, led by interim chief executive Christopher Woolard, said the transition from Libor has progressed, but there is more to do.

“Transition from Libor to alternative risk-free rates should, in the long-run, increase market integrity,” added the FCA. “But we are still concerned that the potential for a disorderly transition could lead to harm.”

After the financial crisis there were a series of scandals regarding banks manipulating their submissions for setting benchmarks across asset classes, which led to a lack of confidence and threatened participation in the related markets. As a result, regulators have increased their supervision of benchmarks and want to move to risk-free reference rates (RFR) based on transactions, so they are harder to manipulate and more representative of the market. The UK has chosen the sterling overnight index average, Sonia, as its risk-free rate.

The FCA said two years ago that it will not compel panel banks to submit to Libor beyond 2021. However, the report noted that a large number of contracts and systems need updating before the end of next year when Libor is expected to stop. For example, at the end of August last year there was more than £25($32) trillion of outstanding notional in cleared sterling Libor derivatives, with half maturing beyond the end of 2021.

“Some markets have made good progress, but Libor is still used heavily, including in new contracts in some markets,” said the FCA. “We continue to work closely with market participants and other authorities to support the transition effort” 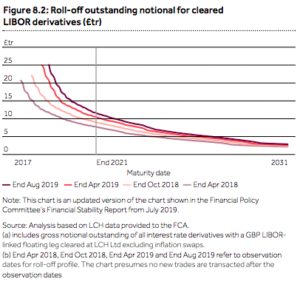 There is also potential for a disorderly transition from Libor in investment management, which could result in significant harm, according to the FCA. The report cited a survey from the Investment Association which found that 40% of asset manager respondents said that client Libor exposures increased in 2018 while 45% said they decreased.

“Transition cuts across investment and hedging products, fund and manager benchmarks, critical risk management and many middle and back office processes,” added the study. “It also affects key oversight functions, such as authorised fund managers and depositaries.”

The FCA also highlighted that firms in the retail market need to take action as more than 200,000 mortgage contracts are linked to Libor.

“Firms need to consider how their contracts will operate when Libor no longer exists, and whether the terms allow the contract to be moved to an alternative benchmark,” sad the report. “A small number of firms are still offering Libor-linked mortgages. We are monitoring this issue closely.”

Trading volumes of RFR derivatives hit record volumes last month according to a blog by Chris Barnes at analytics provider Clarus Financial Technology, showing there is some progress in the transition from Libor.

However the data showed that RFR trading continues to be dominated by activity in the short maturities.

“For example, the tenor profile of GBP Sonia trading is very much dominated by tenors shorter than two years,” added Barnes.

Amir Khwaja, chief executive of Clarus, said in a blog that interest rate swap trading is still dominated by Libor, rather than Sonia, notional for trades maturing after the start of 2022.

Khwaja continued that it will be interesting to see how Sonia volumes develop as sterling Libor is due to stop trading on 2 March. Last month the FCA and the Bank of England said  market makers should change sterling interest rate swaps from Libor to Sonia in the first quarter of this year.

Edwin Schooling Latter, director of markets and wholesale policy at the FCA, said in a statement: “I encourage all market participants to join the initiative to put Sonia first over Libor from 2 March. This should help make Sonia the market standard in sterling swaps as is already the case in the bond market.”

Khwaja said it is a very tall order to see a massive shift in volumes in two weeks.

“More time will be needed and possibly we also need to wait for term rates in Sonia to become available, which a few firms are competing to publish,” added Khwaja.