Stéphane Boujnah, chief executive of Euronext, said some sellers are becoming more flexible and the mechanism of acquisitions is changing due to the volatility caused by the Covid-19 pandemic.

Boujnah spoke this morning on Euronext’s results call for the first quarter of this year.

He continued that the pan-European exchange operator is continuing to look at acquisitions to meet its ambitions for growth and to diversify revenues away from trading.

Euronext will acquire c.70% of VP Securities, the Danish #CSD operator with more than €1.2tn of assets under custody.
A new milestone in the deployment of Euronext’s ambition to build the leading pan-European market infrastructure.
➡️https://t.co/4wWQEsZmcc pic.twitter.com/p5gV14Uo6a

“We are monitoring other situations and are having some dialogues but in most of these, nothing happens,” Boujnah said.

He continued that the fall in prices during the pandemic means some sellers are becoming more flexible, although there are not yet any distressed sales and there are likely to be fewer open auctions.

“The grammar and choreography of doing deals is changing,” Boujnah added. “This creates opportunities for us as we are agile and can take part in bilateral processes.”

He continued that disposals of market infrastructures owned by bank consortiums present a good opportunity.

“There were sales after the global previous crisis so we expect others,” said Boujnah. “This a spot where Euronext wants to be.”

“It will double our CSD business size, further improving our revenue mix and increasing the share of non-volume related revenue,” he added. 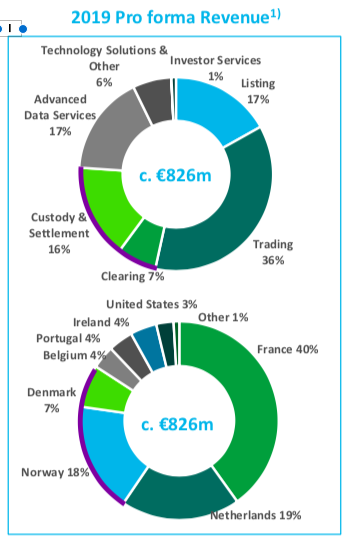 “VP Securities shares technology with VPS in Oslo and the companies know each other well,” he added. “They have previously discussed joint offerings.”

He said there is an opportunity to monetise data from the two Nordic CSDs as there is a demand to have more information on the behaviour of the asset owners.

Giorgio Modica, chief financial officer, said on the call that all asset classes experienced a double-digit increase in trading revenues in the first quarter and post-trade revenues doubled due to the consolidation of the Norwegian VPS CSD.

Euronext delivered a strong performance in the first quarter of 2020.

Boujnah said:  “The group reported a cash trading market share at 69.9% which highlights the important role of transparent market venues ensuring fair and orderly markets under extreme market conditions. This quarter’s solid performance demonstrates the resilience of our operating model and validates the investments over the past four years in developing our state of the art proprietary trading platform Optiq.”

Exegy Sees ‘Intelligent’ Data as the Future of Trading

FTX is ‘Watershed’ for Crypto