Back to the Future: The New (Old) 20Y Nominal Securities and How the Market Evolved

Tomorrow the U.S. Treasury will conduct the final reopening of the recently reintroduced 20-year bond. With some semblance of a track record under its belt, albeit early days, we thought now was a good time to examine how the 20-year’s been received and why it matters.

In May, for the first time in over a decade, the market prepared for a new (old) nominal security: the first issuance of a 20-year bond since 1986. Given that U.S. Treasury issuance tends to have regular intervals and relatively predictable and consistent sizes, the addition of more duration to the market is significant.

Not unlike the 2006 reintroduction of the 30-year bond, the new 20-year auction became a focal point for the market. In some respects, the backdrop of the rates landscape was similar when both bonds were reintroduced, with generally low yields. Although only one of them launched in the midst of a global pandemic.

The 20Y auction results were pretty in line with other recent long-term issuance. Further, investor participation by class was roughly in line with a typical 10Y or 30Y auction, although there was relatively strong demand from pension, retirement and insurance funds, who bought more in this 20Y auction in May than any 10Y or 30Y nominal bond auction since October 2015, and continued to show demand in the June reopening.[1]

Moreover, during the June reopenings of the three securities, the 20Y saw relatively strong demand, with a relatively high bid-to-cover compared to May’s auction and an auction yield through the 1pm WI level. Meanwhile both the 10Y and 30Y auctions saw bid-to-covers flat to lower compared to May, and yields that saw some concession relative to 1pm WI levels. Following one of the strongest 30Y auctions in years, we will see how the final reopening of the 20Y goes on Wednesday.

Still, there are other interesting things about the reintroduction of the 20Y that we think merit further examination. We wanted to examine both the evolution of trading in the new issue as well as historically how activity in new benchmarks has progressed.

Like other new U.S. Treasury securities, the When-Issued (WI) 20Y became active for Tradeweb institutional clients on its announcement date – in this case May 14th, 2020. The WI market for this security generally developed like that of the other long-term securities (i.e, 10Y note, 30Y bond) with virtually the same number of liquidity providers prior to the auction.

As with other Treasury securities, the auction acted as the liquidity event. The numbers of liquidity providers sending indicative quotes on the first day following the auction (i.e., the first day the security was an “on-the-run”) grew in line with typical participation for an on-the-run. Moreover, actual pricing updates during U.S. trading hours[4] were in-line with pricing updates for the long bond.

As Tradeweb has been facilitating electronic trading of U.S. Treasuries since our foundation in 1997, we can look at how trading activity evolved in previous episodes when the Treasury launched a new maturity. We think that the two most instructive comparisons are what happened to daily volumes when the Treasury reintroduced the 30Y bond in 2006 and the 7Y note in 2009.[5] In both instances, the new maturity had limited impact on other benchmark securities and resulted in additive trading volume.

For simplicity, we focused on on-the-run trading of our institutional clients during the launch of these securities over a decade ago.

Reintroduction of the 30Y Bond 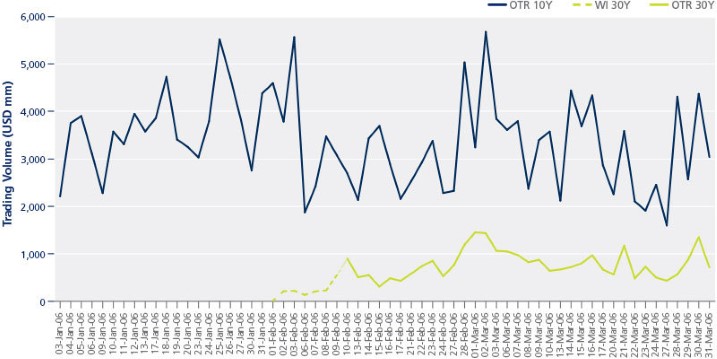 Reintroduction of the 7Y Note 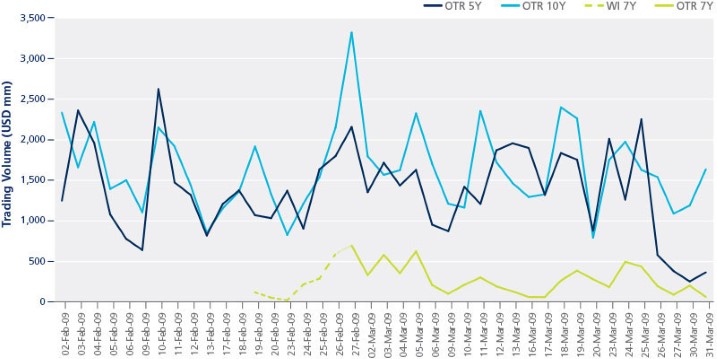 In 2009, and among other actions, the U.S. Treasury began a long-term campaign to increase the maturity profile of its overall debt by increasing issuance in long-dated securities. This has extended the average maturity of government securities outstanding from ~50 months to its current levels ~70 months.[8] Long dated issuance has now grown from ~5% of total nominal coupon issuance to ~9% of an ever growing total issuance in the first calendar quarter of 2020.[9]With this shift, we have seen the bond sector become an increasing percentage of Treasuries notes and bonds outstanding[10]. Treasury Bonds that have a maturity of 20 years and over currently comprise more than 16% of the total, a doubling from 2011.

At Tradeweb, this has had an impact on the makeup of trading activity in the government bond market, with trading in longer term securities becoming an increasing proportion of trading activity.  This is obvious on the Tradeweb institutional platform, where steady growth in long-term debt issuance means ≥20 year bonds now represents 12.0% of nominal coupon volume vs 7.3% in 2014. 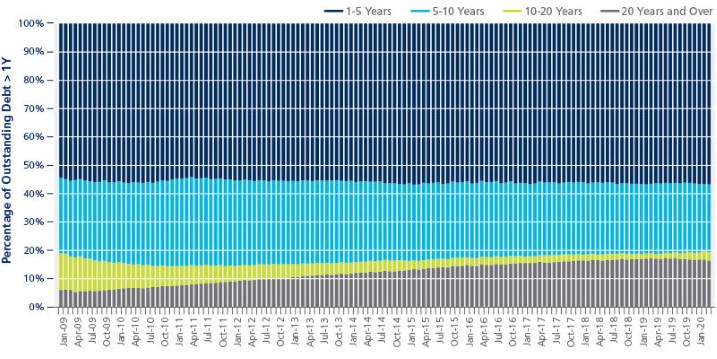 In the end, one of the most interesting outcomes of the new 20Y auction is how uneventful the event itself actually was. One could chalk this up, in part, to the benefits of the “regular and predictable” auction strategy that the U.S. Treasury adopted for all marketable securities after observing issues with auctions in 1975, during another period of rapid expansion of the federal deficit.[11] It also helps that the Treasury works with market participants to ensure orderly trading of its debt – and indeed it appeared market participants were well-prepared. With the continued growth in the issuance of long-term bonds, the power of a well-functioning electronic market built with its customers in mind, like Tradeweb, is essential to ensuring transparent and robust liquidity in one of the most important markets in the world.

This is sales and trading commentary, not official research. Not intended as investment advice.

This commentary was first published on Tradeweb.