AxeTrading, which aggregates fixed income liquidity for electronic trading, has joined the Bond Dealers of America to expand in the US and received funding from IFC, part of the World Bank Group, which will help growth in emerging markets. 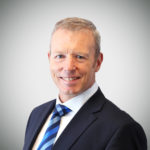 Mark Watters, chief commercial officer and co-founder of AxeTrading, told Markets Media: “We have had an ambition to grow in North America for a while. We have three clients live in the US, and more are engaging, but we have never had people on the ground.”

The timing of putting people on the ground will depend on how Covid-19 develops but the firm joined the Bond Dealers of America last month.

Delighted to share the conversation between Mark Watters of @AxeTrading and Mike Nicholas of the @BDAmerica looking at AxeTrading's plans and major developments in the #bondmarkets. https://t.co/fTdu4QMz9E pic.twitter.com/4c7is9jN6E

Watters said: “Members include middle-market and regional dealers who do not have the large budgets required to build technology in- house and evolve at the pace required to compete.”

AxeTrading is not a trading venue, but instead brings together liquidity from more than 22 fixed income trading venues, into one application on a trader’s desktop. This was particularly valuable when staff were forced to work from hime due to the pandemic and had access to fewer screens than in the office.

For example, at the start of this year AxeTrading connected to UBS BondPort, the Swiss bank’s electronic execution credit smart order router, providing access to the equivalent of $30bn of daily global liquidity in credit, rates and emerging market bonds.

The international growth will be funded by the closure of last month’s Series A investment round with a group of global investors.

AxeTrading has just closed a significant multi-million Series A investment round with a group of global investors led by @IFC_org Finance Corporation, part of the @WorldBank Group, alongside Sumscope and @SixThirty_630ft. https://t.co/VwEXqwBU63 pic.twitter.com/O9XxiKOZU8

Andi Dervishi, IFC’s global head of fintech investments, said in a statement: “We see a capital markets future where most or all fixed income securities are traded electronically, enhancing price discovery, market transparency and liquidity. AxeTrading makes access to those markets feasible and simple for small and large participants alike.”

Dervishi continued that this is even more important in emerging markets, where participants tend to be small and are unable to develop their own trading software and tools.

AxeTrading has been appointed by the Indonesia Stock Exchange to provide fixed income trading technology for the country’s bond market. In South Africa, Nedbank became the first bank to transact on the country’s ‘ETP’ government bond electronic trading platform when it launched in 2018. Nedbank and several other ETP participant banks used AxeTrader.

Watters said: “There are still venues to add on our roadmap including other markets in Asia and emerging markets where IFC has client relationships. For example, we do not have a presence in Latin America.”

He continued that electronic fixed income trading is gaining traction in Asia.

“The Chinese bond market could become the largest in the world and the Singapore Exchange is pushing electronification,” added Watters.

Watters said that it is not just fixed income execution that is being digitized, but the entire value chain – from finding the relevant bonds, to making investment recommendations, through the trade lifecycle. “There has been an evolution in data,” he added. 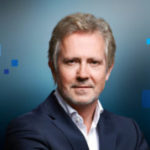 Matthew Hodgson, chief executive and founder of Mosaic Smart Data, said in a statement: “In today’s fixed income markets, access to comprehensive real-time data is not just important for success but a requirement for survival. The differentiator will be how effectively firms extract all the available insights from that data and, crucially, translate them into action.”

Watters said AxeTrading will form other partnerships that provide value to clients, for example, with providers of order management systems, as the buy side is looking for more sophisticated order execution capabilities in fixed income.

The International Capital Market Association said in its corporate bond secondary market study in March this year that asset managers are looking to new approaches for sourcing liquidity as the capacity of dealers to provide liquidity is becoming more constrained and increasingly selective.  Fund managers are either becoming more sophisticated in their interaction with market makers, or through diversifying their use of trading venues and protocols.

“Accordingly, buy sides are increasingly relying on counterparty analytics, monitoring hit and quote rates of dealers across sectors and credits, as well as observing market reaction in response to a request,” added ICMA.

The report highlighted the increased reliance on automation in the trading process, both for buy-side and sell-side firms. 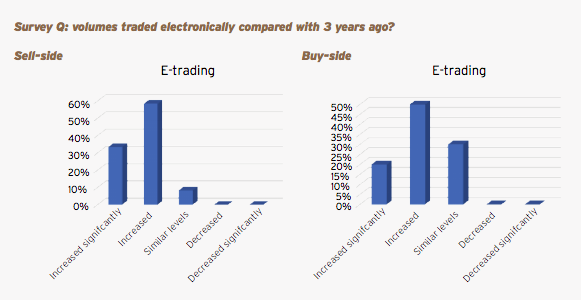 “Sophisticated “rules-based”, or even algorithmic, automated processes to manage and direct orders to venues or counterparts are commonplace in equity markets and have been widely used by asset managers for many years,” added ICMA. “As technology becomes more advanced, their adoption in the fixed income space has become more prevalent, albeit mainly in the more liquid, homogenized, sovereign bond segment.”

The report said there is a burgeoning focus on the capture, analysis, and deployment of firms’ proprietary order and trading related data.

“There is a lambent alertness among both sell and buy sides that this will be the focal point for market development over the next few years, generating greater efficiencies for low-touch (liquid) trading, while providing enhanced intelligence to support the high-touch (illiquid), alpha generating sub-set of trading activity,” added ICMA. “In the case of the former, machine learning will inevitably play an increasing role, creating a more established human digital partnership to fill the traditional trading seat. For a number of interviewees’ firms this is not just informed speculation, but rather a strategic priority and a major investment of resources.”