At 230, the NYSE Continues to Transform and Evolve

When senior executives, government officials and other luminaries visit the New York Stock Exchange, they typically stop at the Big Board Club, two floors of the building designed to host a variety of events including bell ringings, conferences, investor meetings and media interviews.

Out of public view, these floors combine the modern and the iconic, the opulent and the functional, as befits an organization that recently celebrated its 230th anniversary but continues to sit at the cutting edge of finance, commerce and technology. Walking the halls of the Big Board Club brings this fascinating contrast into sharp relief and tells the story of the world’s largest stock exchange and its constant evolution and transformation. 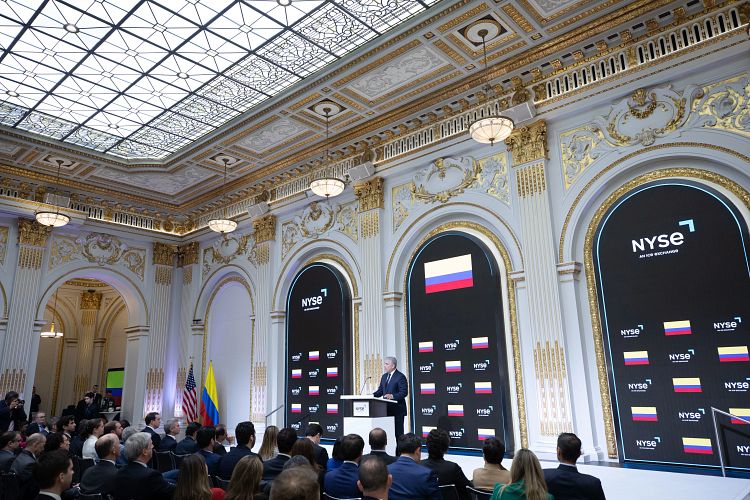 The NYSE Board Room in action with President Ivan Duque of Colombia addressing media and guests.

Guests might visit Siebert Hall, dedicated to Muriel Siebert, the first woman to buy a seat on the NYSE back when the exchange was member owned. Or they could attend an event in the building’s famed Board Room, with its stunning gilt-adorned walls and 26-foot skylight ceiling.

In a hallway between the two, they might view an art collection curated by oft-photographed NYSE floor trader Peter Tuchman that includes six framed Boss Beauties NFTs. In the nearby Chairman’s Room, they could see a recent oil painting of immediate past NYSE Chair and Intercontinental Exchange Chairman and CEO Jeff Sprecher, who guided the modernization of the exchange following ICE’s acquisition of the iconic institution in 2013.

“Jeff is always the first person to identify opportunities — pushes us to think outside the box — and that legacy will absolutely continue at NYSE,” NYSE President Lynn Martin says in a video tribute celebrating Sprecher’s achievements at the exchange before stepping down as chair.

Sprecher guided the institution into a new era, in which the NYSE retooled its culture in the entrepreneurial, can-do spirit of ICE and launched a massive upgrade of the exchange’s core technology while continuing to incorporate the unique value provided by its trading floor.

“The integration of the company is largely complete,” Sprecher says, “and it’s time for it now to blossom.”

The further implementation of Sprecher’s vision falls to Martin, who assumed her role at the NYSE earlier this year. She brings a unique resume to the task, starting her career as a computer programmer and data scientist and building ICE’s massive data business from scratch. In numerous media interviews and conference presentations, Martin has shown just how relevant her background is to the NYSE community, explaining that every company today is in fact a tech company and how she leverages her skills to help these organizations tell their technology stories.

Beyond Martin’s own background, the collective resources and experience of ICE will be invaluable to executing on her agenda. The NYSE’s parent company advanced from startup in 2000 to the Fortune 500 list on its ability to bring technology and transparency to the financial ecosystem. ICE began by revolutionizing trading in the energy markets but has expanded across asset classes, most recently working to digitize the heavily analog mortgage industry.

In many ways, ICE is the embodiment of the modern tech-driven company that Martin describes so passionately. Looking back over its history, the NYSE itself is no stranger to embracing the leading technology of the times. After its founding in 1792 under a buttonwood — now known as American sycamore — tree in lower Manhattan, the exchange evolved in key stages to become the modern NYSE we know today.

Brokers in 1899 examine recent sales coming across the stock ticker at the NYSE.

In 1867, the exchange embraced a technological innovation that changed capital markets forever. That year, the stock ticker came to the NYSE, allowing investors far from the exchange building to receive continuous pricing information. Previously, the only way to get current pricing data was through a series of runners on the streets of New York City.

“It literally connects us through the veins and arteries of this communications system to the rest of the country and the world,” explains Pete Asch, the NYSE’s senior archivist.

Four years later, the NYSE shook up operations once again, converting to a continuously traded market where all stocks could be bought and sold at once — and the first use of a bell to open and close the market. Before this, trading sessions were held for one security at a time. The move to electronic activity took place over a 50-year-plus period beginning in the mid-1960s when the combination of volume and paper records became overwhelming.

“Things that seem historic and quaint now at the time were cutting edge,” Asch says. Those early transformations eventually led to the NYSE that stands today on the corner of Wall and Broad Streets and serves as a symbol of capitalism across the globe.

Vogue’s Anna Wintour and Balenciaga’s Cedric Charbit at the brand’s fashion show on the NYSE floor.

Several weeks ago on a brilliant Sunday morning, the NYSE was abuzz. Outside, limousines pulled up through throngs of onlookers and paparazzi as celebrities stepped out, walked up the cobblestones of Broad Street, entered the exchange building and headed straight for the trading floor. Inside, Balenciaga, the cutting-edge fashion house, was about to show its Spring 2023 collection, the first fashion show to ever take place on the famed NYSE floor.

This most modern of fashion brands had chosen the world’s most modern yet iconic exchange to tell its story to the world. Others this year have made the same choice.

When the president of Colombia and the prime minister of Vietnam wanted to see American capitalism in action, they visited the NYSE floor. When McLaren Racing brought its Extreme E electric racing SUV to New York and Ford celebrated the production launch of its F-150 Lightning full-size electric pickups, the vehicles were proudly displayed in front of the exchange building. 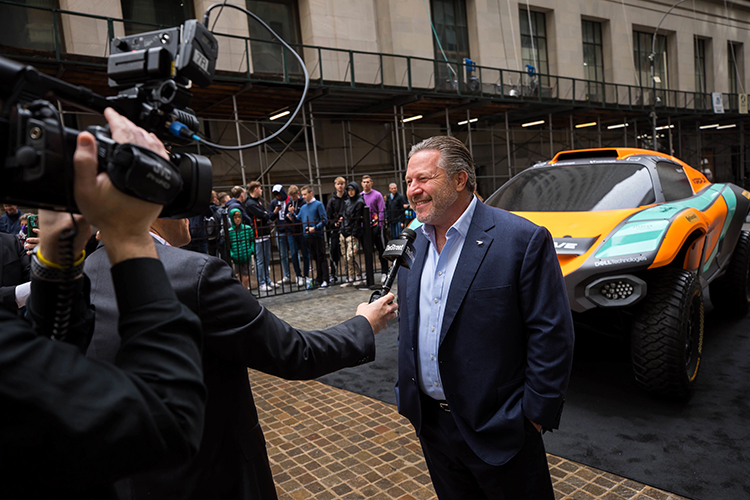 With each new visit, each new event and each new company listing, the NYSE’s evolution continues. One of Martin’s first initiatives as exchange president was to launch the NYSE Sustainability Advisory Council, bringing together the sustainability leaders of a number of the world’s leading companies to focus on best practices in this critical area for corporations and our planet. Of course, the council met for the first time at the NYSE building, the same day the bright orange McLaren e-SUV — which races in a series designed to focus attention on the environment — made its Broad Street debut.

As the years tick by, the NYSE drives ever forward, demonstrating that a long-established organization can both honor its roots and embrace the future, including all the value that technology can bring.